Matthew Wright is the latest name in eventing to become a member of Team Shires. The Nottinghamshire-based rider joins fellow event riders Camilla Speirs, Emily Beshear, Selena O’Hanlon and Bonnie Fishburn as part of the team of performance riders who “are passionate about their riding careers and their horses.”

His previous achievements include a silver medal at the Young Rider European Championships in 2002 on Park Pilot — a horse that he bred, backed and produced himself. He has competed for Great Britain at Junior, Young Rider and Senior levels, most notably finishing 13th at the FEI European Championships at Blenheim Palace on his Senior Squad debut.

He has also competed consistently at four-star level, with six Badminton and Burghley competitions between 2002–2014 under his belt — riding his first Burghley track at 18 years old. 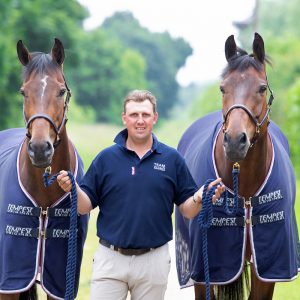 Matthew is back for the 2018 season after taking a step away from top-level eventing in 2014/15 due to ill health. After his recovery he has been focusing on producing and bringing on young horses, as well as competing up to two-star level. This year sees his string of fourteen competition horses contain seven advanced rides, including DHI Paparazzi, Prince Mayo and The Artist Almost Famous.

“I am so excited to be working with Shires Equestrian and to have their support for the 2018 season. My horses have been wearing Shires rugs for many years, so to be officially part of the team is an enormous honour. I’m really looking forward to the rest of the season together and the start of a great partnership.”

As part of Team Shires, Matthew joins the sponsored rider team of British, Irish, Canadian and American riders across different disciplines and levels.

Since 1968, Shires Equestrian have been an integral part of the equestrian trade industry, supplying horse and rider alike with great products that stand the test of time. Shires is a family-run business, well-established as one of the leading names in equestrian equipment, and a major player on the world stage.

“Matthew has a true fighting spirit with a wealth of experience. Everyone at Shires is proud to be supporting him in his comeback year.”

Both Shires and Matthew are looking forward to the rest of 2018. Matthew in particular, cannot wait to get back into action.