You might think of a good-doer as a native or cob type, but horses who put on a kilo or two at the mere sight of grass can come in all shapes and sizes. Keeping the extra weight off them can be an uphill battle but, when armed with a few management tricks up your sleeve, maintaining your horse’s figure can be, well, a piece of cake.

Your horse needs to spend most of his time eating forage, such as hay and grass, in order to keep his digestive system functioning healthily, but if he’s piled on a few extra kilos, you’ll balance this with limiting the volume of forage he consumes. There are plenty of ways to achieve this, so the trick is finding a method that suits his lifestyle. 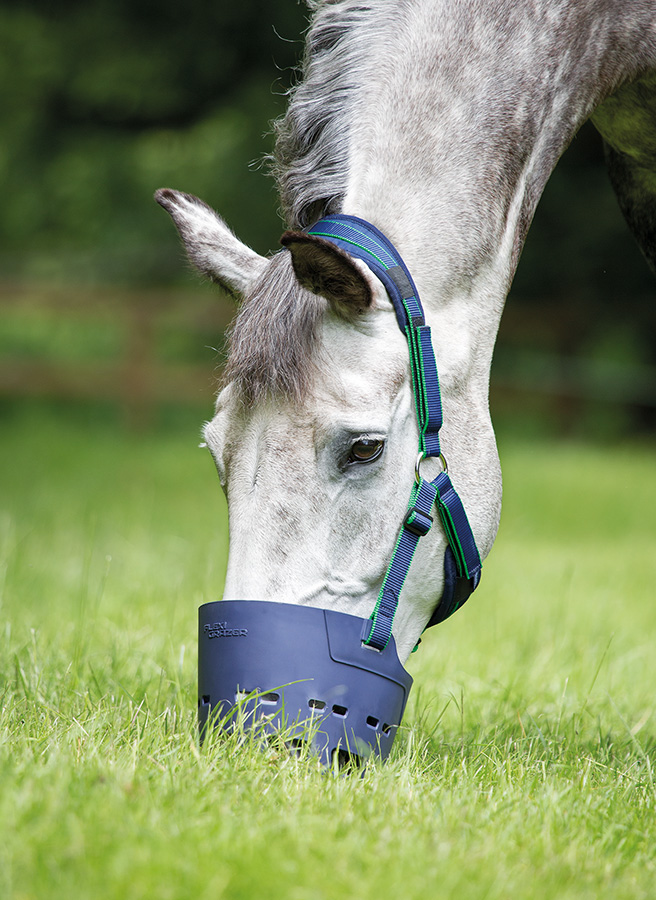 You can easily limit his calorie intake by making alterations to his grazing routine. Strip-grazing, which involves using extra fencing to section up your field, limits the grass that’s available to him and means that, although he’ll have access to grass all day, his intake will be restricted. Make sure you move the boundaries of the strip by a metre or two every few days to avoid over grazing, as this will damage your grass, but will also ensure he’s still got enough to eat.

Another option is to fit a grazing muzzle to your horse, which will limit the amount of grass available to him with each mouthful. Take time to get him used to this gradually, paying close attention to its fit to avoid rubbing. You should be able to fit two fingers between the muzzle and his nose, and there should be a one-inch gap between his lips and its base. Grass muzzles shouldn’t be left on for more than 10-12 hours, so when he’s not wearing it, he needs to be in a stable or bare paddock with hay, as many horses overcompensate and stuff themselves when the muzzle’s removed.

Another great way to reduce the amount of sugar he’s eating is to swap his turnout hours to the night. Without the sun, the sugar-producing ability of grass is vastly reduced, so not only will he consume fewer calories, this method also goes a long way to reducing the risk of laminitis, too. However, if you feel he’ll end up being out for longer this way, combine it with a muzzle.

When he’s in during the day he’ll require forage to nibble on. If you’re still concerned about how much he’s eating, you could slow him down with a small-holed haynet or by double-netting his forage ration. You can reduce the calories in his hay by soaking it for at least an hour, which will remove much of its sugar content.

Reducing the sugar in his bucket feed can also go a long way to helping him maintain a trim figure. Opt for an unmolassed chaff and a light balancer to reduce his calorie intake but still keep his belly full with all the nutrients he needs.

How to Fit a Grazing Muzzle: