We chatted with Megan to find out more about her horses, career and ambitions… 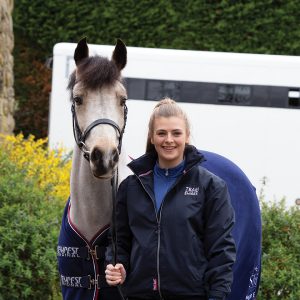 At three and a half years old, Megan Elphick had her first ride on a friend’s pony, Barney. Despite being allergic to horse’s at the time, Megan became obsessed with horses from her first ride. Luckily, Megan started to grow out of her allergies and her parents bought Barney. As an active Pony Club member, Megan particularly enjoyed eventing and going to numerous championships. At 13 years old, Megan started British Eventing and continues to love every second of it.

What is the highlight of your career to date?

There have been so many over the years, however, I would have to say that qualifying Bear for Badminton last year is certainly one of the top ones. We went to Weston Park with no expectations as we had some very fancy horses in our section and it was only Bear’s first season BE. She just blew me away and didn’t put a foot wrong the whole day. It was the biggest event she had been to so I was worried about her getting around the cross country. She went clear and finished on the optimum time, I cried as I crossed the finish line as I was so proud of her. I cried again when we checked the scores because she had managed to win the whole qualifier. That is certainly a day which will stay with me.

The best bit of advice I was given as a child was to not fixate on what horses other people have. It is very easy to compare your horse to a nice flashy, ready made one in the collecting ring and feel disheartened that you aren’t getting the same results. I’ve learnt that it is far more rewarding to be riding one you have produced yourself rather than one bought for a lot of money.

What are your goals for the future?

I would love to one-day win at Badminton Grassroots, but that certainly isn’t the aim this first time. I would also really like to step up to 1* on Lara and Dee at some point if the opportunity presents itself. Once I finish university I hope to continue producing young horses as that is where my passion really lies.

Tell us about your horses 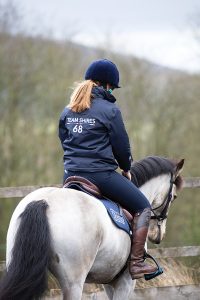 Bear: my 9 year old, 14.1 (small but mighty) Welsh Section D, dun mare. We bought her online completely unseen, partly because we love duns and because we felt so sorry for her. Her history is very unknown; she had been broken to some degree but we have no idea what she had previously done. All we knew was that she has been passed through the sales lots of times. When she arrived she was extremely thin and very unwell, we expect this was why at the time she was quiet to ride. Once she was healthy again she was very ‘high spirited’ to put it nicely. There were many occasions where we thought she wouldn’t be able to have a ridden career as she was so wild. However, after months of persevering we got her out eventing and we haven’t looked back since. She will always have a special place in our hearts for making the Badminton dream as reality. I like to think we have made her dreams come true as well as she had a rather bleak future ahead of her before she came. 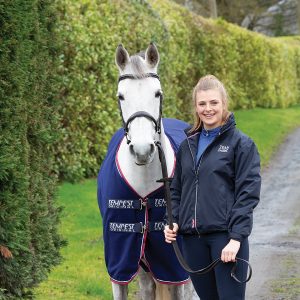 Dee: my 9 year old, 15.1 grey Connemara mare. She came over from Ireland as a four year old to be produced. We were at a yard looking at another horse when we saw her in the field, she hadn’t done anything at that point but we just fell in love with her personality so ended up taking her home. She was meant to be sold on once we got her eventing but we just fell in love with her. Again she wasn’t the easiest to produce as she is very sassy and opinionated. She is still very sassy but she looks after me endlessly, I have a very strong bond with Dee. She now competes at BE100 and will be aimed at Badminton grassroots again and hopefully at 1*. 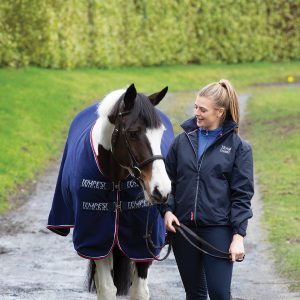 Lara: my last competition horse. She is a 13 year old, 15.3 coloured Irish sports horse. She came over from Ireland when she was 3, we then bought her when she was rising 5 from Wales. She had done some bits and bobs, but was deemed too untalented to event so we got her cheaper than she should have been. Again she was meant to be sold on but we just loved her personality too much. She still isn’t the most talented horse but she will always give you 110% no matter what. She events at BE100 and will also hopefully move up to 1* one day. She had a gorgeous colt foal two years ago who we have kept to event. Due to this, 2019 will be her first full season back eventing since maternity leave. Despite looking like a cob she is actually the sharpest, and probably the hardest to ride.

I am lucky enough to have two lovely little filly foals as well as Lara’s colt who will be the next generation of eventers hopefully. I also have a lovely 5 year old Connemara mare who I will be breaking in and producing this year. I have a very exciting year ahead of me with my wonderful horses.

What’s most important to you when you’re buying a horse?

Without a shadow of a doubt their personality matters the most. Mum and I believe that the most important thing when training a horse is that they are kind and willing. There is no point having a really talented horse if it just doesn’t want to play ball.

What are your favourite Shires Equestrian products?

I really don’t think you can beat a Shires rug. My horses’ wardrobes consist of numerous Shires rugs and they always fit and last so well. Bear even still wears a rug that my old pony club pony used to wear many years ago, that’s how long they last. I also have a pair of Shires gloves which I couldn’t live without as they are waterproof and work on my touch screen phone. It is so hard to pick just one thing as most of my yard is made up of Shires products which I use every day.

Keep up-to-date with Megan and her horses here: